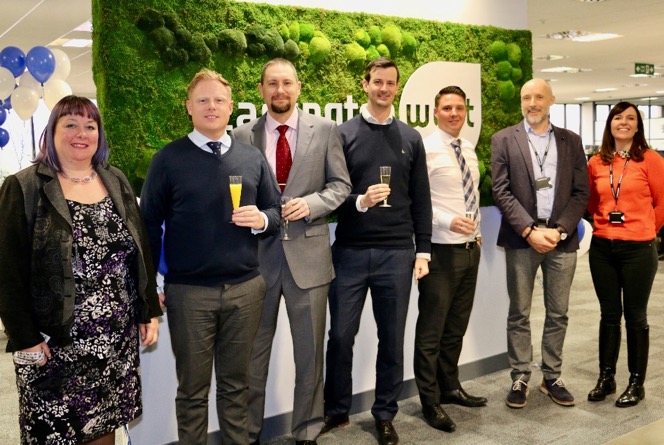 Lakeside North Harbour is celebrating with technical recruitment agency Carrington West, following the company’s expansion on the prestigious business campus. Carrington West, which has occupied space at Lakeside North Harbour since 2012, initiated the expansion last year following its successful growth and need for more extensive office space. The company has gone from strength to strength in recent months culminating in its recent accolade as Employer of the Year, received at The News Business Excellence Awards on 1st February 2019.

Established in 2011, Carrington West always aspired for Lakeside to be its office base. The company was keen to grow to the size that would support offices in a professional location, and even had a picture of the Atrium at Lakeside on the wall of its first office. The founding Directors originally joined the Campus in the Regus office space, but after rapid growth were quickly in discussions about expanding. Initially the team at Regus helped, providing more office space, until the time came for Carrington West to take its own dedicated space in Building 1000. Continued success necessitated a move earlier this month into a 6,200ft office suite on the 2nd floor of Building 1000 which is now home to 85 staff. Fellow occupier Portsdown carried out the fit out.

Karen Tyrrell, Head of Marketing and Client Services at Lakeside North Harbour, comments: “We are delighted that Carrington West has seen such success at Lakeside – and has continued to choose the Campus for its new expanded office space. It has been really exciting to see the company grow as a business from its first space with us into this bespoke area.”

James Fernandes, Managing Director at Carrington West adds: “The scenery, open space and facilities at Lakeside are a really important part of our employment offer – there really is something for everyone – and it all helps aide staff retention. We want to be part of an impressive and professional looking business community and Lakeside absolutely delivers that. The Lakeside team have always been extremely flexible and responsive to our needs, and they are constantly investing in the Campus - improving facilities, adding new breakout spaces like the table tennis and deckchairs on the lawn and staging events like the live music lunchtimes and street food Fridays – in my opinion they have created the cutting edge of office facilities. I’ve been all around the country meeting clients in different business parks and this is the best business campus I know.”

Leo Kelly, Director at Portsdown, who carried out the office fit out comments: “We were excited to hand over this completed space for Carrington West. The office gives the Carrington West team additional space for future growth, and supports the work tasks, meeting, training and socialising needs of employees in an energising and dynamic setting. The completed space has been well received, and staff have loved moving in.”

Back to all news